Hub will be one of the world’s most innovative nuclear, hydrogen, maritime and transport decarbonisation schemes.

The planned Freeport East Hydrogen Hub will be one of the world’s most exciting and innovative nuclear, hydrogen, maritime and transport decarbonisation schemes.

As a pillar of the Freeport East bid, it could begin to create significant numbers of new jobs within the next 12 months and will demonstrate the UK’s Net Zero capabilities in the build-up to COP26.

At its peak, the project, which will be delivered in partnership with Ryse-Hydrogen and Sizewell C developers, EDF, will produce 1GW of hydrogen – 20% of the 5GW target in the Prime Minister’s Ten Point Plan for a Green Industrial Revolution.

Commenting on the plan, George Kieffer, Chairman of the Freeport East Project Board, said:

“Green energy is at the heart of the Freeport East proposition. The development of the Hydrogen Hub, and the involvement of serious partners in Ryse-Hydrogen and EDF, shows that ours is a proposal backed by real substance. By creating a hotbed for green energy innovation Freeport East will create high-value jobs helping drive regeneration both locally and nationally.”

“Incredible things happen when like-minded industries join forces,” he explained. “The Freeport East Hydrogen Hub will be seen as a global ‘heavyweight’ decarbonisation project, with delivery achievable within 18 months due to the significant private organisations involved, and the pace at which they are able to begin investment.

“The Government wants to kick-start a green recovery and it is projects like this one which can deliver. In addition to hydrogen production and zero-emission transport at the ports, it contributes to the nuclear power programme, will use power from wind farms off the East Anglian coast, will drive innovation and promote green maritime – that’s six boxes ticked of the PM’s Ten Point Plan for a Green Industrial Revolution.”

“Using reliable nuclear power from Sizewell B and C alongside renewables, Freeport East has the potential to host one of the most exciting ‘green’ hydrogen schemes in the UK. Suffolk has great opportunities to benefit from the combination of its nuclear and renewables industry, its ports, and the construction of Sizewell C using hydrogen vehicles wherever possible, to build a hydrogen economy and be at the forefront of this exciting development.”

“The development of the Hydrogen Hub will allow the Port of Felixstowe and Harwich International to lead in the development of alternative fuel port equipment. Establishing a test-bed to showcase hydrogen’s potential in a port environment will establish the UK as a clear leader in developments that will help address climate change and the net-zero agenda.

“With the largest road, rail and maritime freight hub in the country as part of our bid, we have the scale necessary to secure the early take-up of hydrogen power across the freight and maritime sectors.”

Freeport East is centred upon the Port of Felixstowe and Harwich International Port, both operated by Hutchison Ports, part of the CK Hutchison group. Other partners are South East and New Anglia LEPs, Suffolk and Essex county councils, Mid Suffolk Council, East Suffolk Council, Tendring District Council, Harwich Haven Authority and the Haven Gateway Partnership. It is backed by a wide range of businesses, business organisations and education providers. 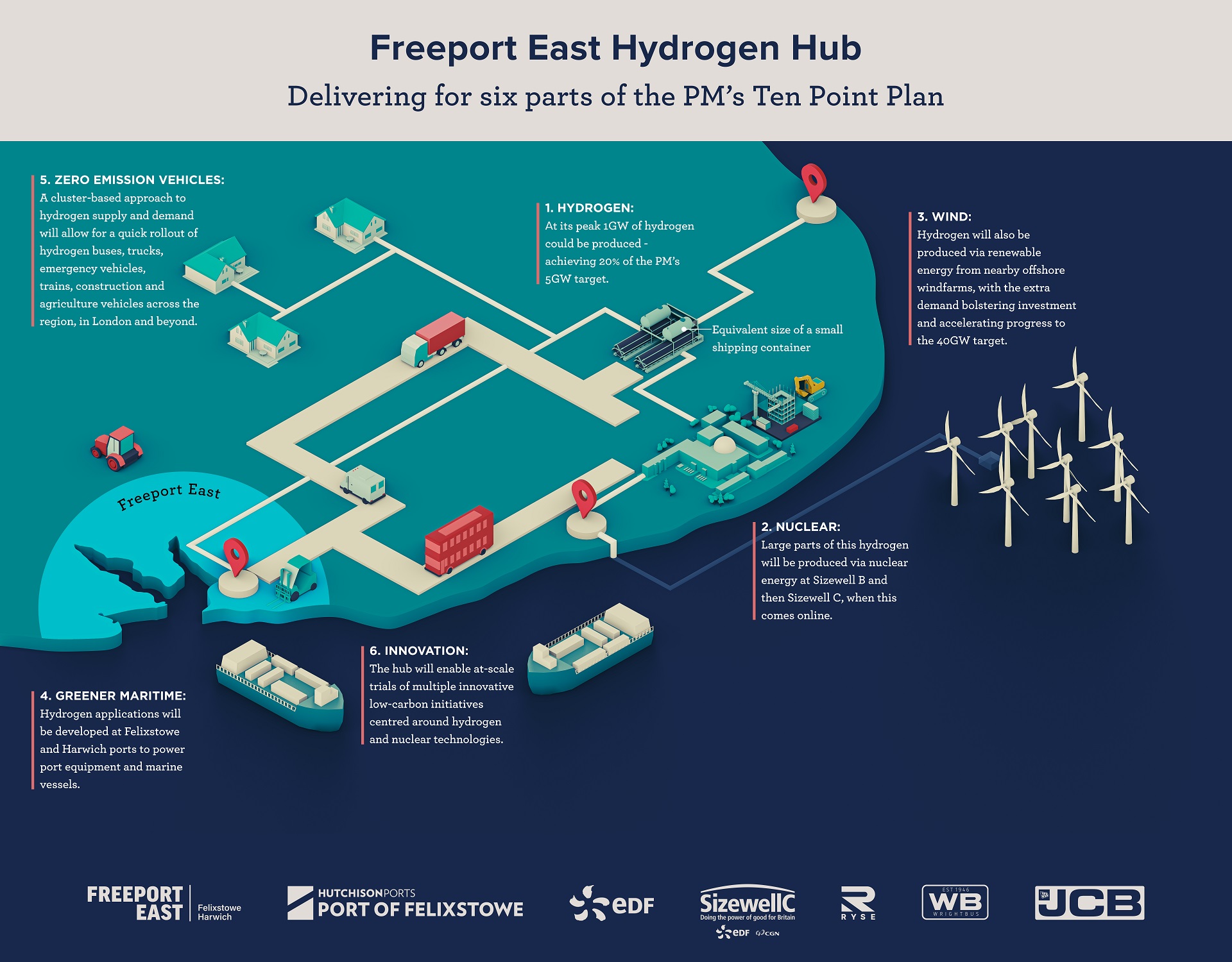