According to recent research*, the UK’s driver shortage is still at severe levels, with a worrying lack of recruits in the under-30 age group.

Mark Bennett, operations director of VKVP Haulage, says: “The report warns that the logistics industry and government must tackle the under-30 age group retention rate ‘as a priority’. He adds: “We urge the sector and government not to be lulled into complacency by this apparent abatement of the driver shortage.

“Given the extremely high churn rates, we only need haulage volumes to rise by a small increment to reignite the shortage crisis. To this end, we are visiting primary schools to generate interest in a career in the logistics industry, familiarise children with trucks and position a career in the industry as attractive and accessible.”

The issues include, but are not restricted to:

• The latest ONS research revealed that 8,000 HGV drivers left the under-30 age group in Q4, which, combined with previous pandemic losses, reduced the cohort to just 13,000 from a pre-pandemic level of 31,000.
• The ONS data also found that HGV drivers numbers rose by only 2,000 to 263,000 between Q3 and Q4, 39,000 lower than the pre-pandemic level of 301,000 in Q1 2020.
• This represents a churn of 67% when net additions from new test passes are considered.
• The Driver Require research also found that whilst EU HGV drivers increased by 3,000 to 33,000 in Q4, this is still 4,000 less than the pre-pandemic level of 37,000 EU drivers in Q1 2020.
• The plus side revealed that the number of HGV tests conducted in Q4 increased by 50% to 27,000, compared to a pre-pandemic average quarterly level of 18,000. In addition, 12,000 lapsed drivers returned to the 30-45 age group, aided by 3,000 new HGV test passes. The report concludes that whilst rising wage rates appear to have attracted back and retained the over-30 age group, it has not been enough to retain those drivers under-30, who have left for other job roles with better working conditions and hours.
• The report warns that the logistics industry and government must tackle the under-30 age group retention rate “as a priority.”
• The report concludes that at the end of 2021, the number of people declaring their occupation to be an HGV delivery driver remained approximately 39,000 below the pre-pandemic level of 301,000, i.e. a 13% reduction in the size of the pool. Assuming demand levels remain constant, the driver shortage did not improve over Q4 2021.
• The report says more than 55,000 HGV drivers have left the sector during the pandemic, approximately 18% of the original 300,000- strong workforce.
• Barriers that contribute to those under 30 not considering being an HGV driver an attractive option are cited as the anti-social hours and weekend working. Whilst money is not the primary motivator for this age group, there is a belief they can earn a similar wage doing easier work. Lack of access to work was also a major contributing factor, i.e. obstacles to newly passed drivers finding a job due to issues including but not restricted to lack of insurance cover. And the fact that many operators are unwilling to invest in training, coaching, and development of those newly passed.

Tackling one of the barriers to becoming an HGV driver is Goldstar Transport’s Driver Training Academy. It is an accessible conduit for those keen to pass their test and then walk straight into a job. The Woolpit-based designated test centre undertakes all its training in-house with the expertise of its two in-house delegated examiners.

Since the lifting of Covid restrictions last November, Goldstar is delighted to confirm that over 25 students have become qualified drivers. All are now on the road, and the Goldstar payroll.

Steve Jones, general manager at Goldstar Transport, says: “The driving academy is one of our most significant achievements. With a first-time pass rate of over 85%, our youngest student to pass is just eighteen. The academy team works hard to get their students through the test and, most importantly, offers ongoing mentoring once they’re on the road until they feel 100% confident.

“And with a loan scheme to help finance the training, our academy appeals to the long-term unemployed and young and/or female applicants that may have been deterred by the training costs or the work-life balance.”

Taking a longer-term perspective, VKVP Haulage is planning its first truck visit to a local school, Langer Primary, in Felixstowe in early April. With the school sited just outside the Port of Felixstowe, logistics is in its DNA, and the visit aims to introduce HGV driving as a career choice. Whilst many of their parents may work in the logistics sector; the visit gives the youngsters a chance to get up close and personal with an HGV and learn all about its size, capabilities, blind spots, stopping distances and more.

VKVP’s Mark Bennett says: “The children will, of course, see all the HGVs coming in and out of town, but here’s a chance to really understand more about the industry, and one which their family might already work in. While we’ll be taking one of our trucks to school, the visit also explains the breadth of opportunities the sector presents. Some students might fancy a life behind the wheel, but other roles such as planners, IT specialists, compliance specialists, warehouse staff, administrators, accountants, or technicians might be more appealing.

“We hope our visit will help them be more aware of the diversity of roles within the industry and that they’re all available to access locally.” 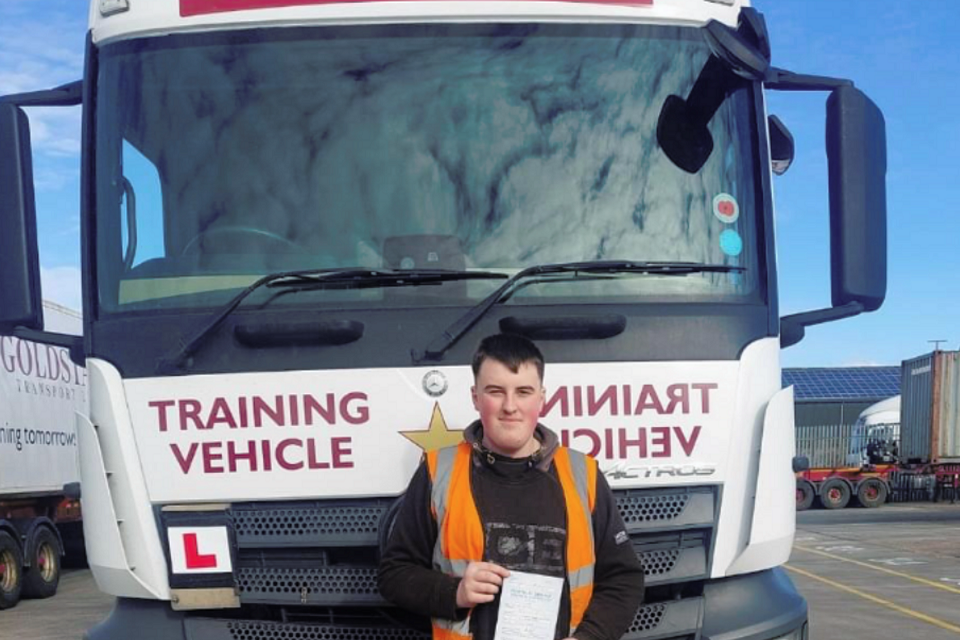