Port breaks its own record for the most containers handled on a single ship for the third time in two months.

The latest benchmark was set when a total of 27,961 TEU (standard containers) were handled on the MSC AMELIA which sailed from the port on 8 March 2022.

Prior to that 25,852 TEU had been handled on the Moscow Maersk the previous week and 23,773 TEU were handled on the MSC DILETTA on 12 January 2022. All three vessels are operated on the 2M Alliance Griffin/AE55 Far East Asia to North Europe service.

Commenting on the latest record, Robert Ashton, Chief Operating Officer at the Port of Felixstowe, said:

“The increasing size of container ships places great demand on port resources, and we are pleased with the way we have responded to this challenge. We are continuing to invest in the people, infrastructure, systems and equipment needed to service the growing number of ultra-large container ships on the world’s major trades as well as the increasing volume of containers on each ship.

“The logistics of such an operation are immense and we will continue to work closely with the 2M partners, Maersk Line and Mediterranean Shipping Company (MSC) to help achieve their objectives to supply the current high demand for Far East imports to UK consumers.”

Work is underway to further increase the port’s ability to handle the world’s largest container ships. Harwich Haven Authority is dredging the main approach channel to increase the depth from 14.5 metres to 16.0 metres. Work commenced last year and is due to be completed in 2023. The port is also increasing the depth at its deep-water berths. Berth 7 was deepened to 16.5 metres and Berth 6 will also be dredged to 16.5 metres in 2022 at the same time as Berths 8&9 are increased to 18.0 metres. 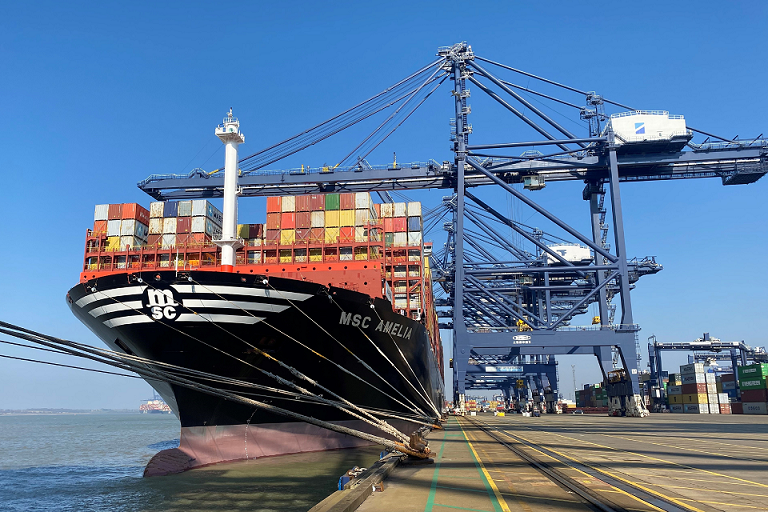