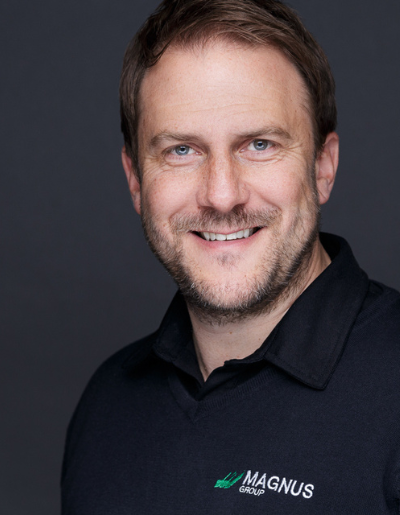 What is it about the logistics sector that keeps you passionate?

It’s an industry I fell into by accident, really, and once you are in it, as we all know, it isn’t easy to get out of! After ten years, I had the chance, having spent a period in Sydney, to change careers. Still, I took an opportunity to be a part of a start-up freight business which ended unnecessarily badly after 16 years of building it up from scratch. Timing is everything, and very sadly, an opportunity presented itself with my Dad’s death in 2018. I took the biggest gamble to sell my 50% share in the business and plough the majority of the money from the deal to buy 40% of Magnus. What keeps me passionate is continually developing the family business my Dad started in the ’70s and proving the people wrong who so disrespectfully said I would never make it a success. I like to think I have proved them wrong, and I want to keep progressing and moving forward.

What do you see as the three main challenges the industry is facing in the next twelve months?

The world is a very different place nowadays, post-pandemic. While freight rates remain high, the big boys will benefit, and the smaller entities will struggle – I sincerely hope this isn’t the case because you need healthy competition worldwide. Fuel is in danger of escalating out of control as long as the war with Ukraine continues, which fuels inflation to an unsustainable level. Because the high streets are dying, this increases the need for warehousing, and they are going up all over the place, will there be a time when supply outstrips demand? The shipping lines now seem to want to extinguish the small forwarders, which is a worry, but we will see how that pans out.

If you could share one thing about the Magnus Group that has made you particularly proud, what would that be?
It was buying 40% of a business that no one on the planet other than me would have done and taking it from £10m to £26m in turnover in two years. After a lot of hard work and sleepless nights, we are now making a decent profit. It could so quickly have all gone very wrong, and I would have lost the lot. If I could have just one wish in life, it would be to be able to have a conversation with my Dad three years on and know that he is proud of me, but I know he would tell me I was an idiot for risking everything.

What do you see as East Anglia’s role in keeping Britain moving?

As the biggest port in the UK, Felixstowe has a significant part to play. The upcoming Sizewell C project will be a huge pressure on the local infrastructure whilst at the same time bringing a substantial financial boost to the area. Suppose this influx of revenue is spent wisely on improving transport links, facilities and general updating. In that case, this area will rightly be a major player in the regeneration of Britain post-Brexit and the crippling pandemic.

What are your thoughts on all HGVs becoming zero carbon by 2040?

I genuinely think it’s going to be a tough ask, I sit on a couple of transport associations with lots of nationwide hauliers, and nobody seems entirely clear on how this will be achieved. There is even talk of having motorway electric tram lines for HGVs, which sounds great in principle, but the cost and work to get that ‘live’ will be huge. There is talk of Hydrogen trucks and chip fat biofuel, but nothing seems to be nailed on as the way forward. On the flip side, technology is changing all the time, and we never know what the next invention will be, but the world will be a much better place if we can achieve zero carbon.

Tell our readers something about you that would surprise them.
I have officially been ‘dead’ 6 times from accidents and health issues – if I were a cat, I would have just the three left, and I intend to enjoy them as much as I can as not one of us knows what’s around the corner. We only have one shot at this, so enjoy it and surround yourself with the right people.