Majority of drivers think all-lane-running smart motorways should be scrapped.

Six in 10 drivers (62%) think that all-lane-running smart motorway schemes should be scrapped entirely and the hard shoulder reinstated, while retaining the technology that manages traffic flows and detects breakdowns, according to research carried out for the RAC Report on Motoring 2021.

Only a quarter of the 2,600-plus drivers (24%) surveyed by the RAC support the continuation of current government policy, which is to stick to four permanent running lanes and no hard shoulder, while increasing the number of emergency refuge areas and including extra technology to detect stationary vehicles and cameras to catch motorists who put others at risk by ignoring closed-lane signs.

Overall, most drivers (63%) do not believe the measures being implemented by National Highways to compensate for the removal of the hard shoulder – such as variable speed limits in response to incidents or to control traffic flow, closed-lane signs, SOS emergency refuge areas up to every 1.6 miles apart and technology to detect slowing or stationary vehicles – are adequate. Just 15% stated they thought they were adequate, with a fifth (21%) unsure.

The RAC research also indicates a sharp increase in safety concerns about smart motorways with 24% of drivers citing this as one of their top overall motoring concerns, up from 16% last year. Drivers over 65 expressed the most concern about the issue, with 44% listing it as their top concern. Less than half of drivers (43%) who have driven on all-lane running stretches of motorway feel safe on them, while 30% say they don’t feel very safe and a quarter (24%) state they feel ‘very unsafe’.

The fear of what would happen in the event of a breakdown on an all-lane-running motorway clearly weighs heavy on drivers’ minds with 84% believing that safety is compromised by the permanent removal of the hard shoulder – up from 67% when drivers were last asked this in the 2019 RAC Report on Motoring.

Drivers also lack confidence in the authorities’ ability to respond to live-lane breakdowns or incidents. Just 30% of motorists say they trust National Highways’ abilities to detect a stationary vehicle in a running lane and react accordingly, down sharply from 53% in 2019, while only 54% say the majority of drivers obey red ‘closed-lane’ signs which are used to keep traffic out of lanes where a breakdown or other incident has occurred, down from 60% two years ago.

“Our research reveals the enormous strength of feeling among drivers of all ages about the safety of all-lane-running smart motorways. But while there’s support for scrapping these motorways across all age groups, it’s highest among those aged 45 and over, with 73% wanting to see the end of these schemes.

“We’ve always had safety concerns about all-lane-running motorways and have raised these by giving evidence to two separate Transport Committee inquiries. While the Government published its 18-point action plan in 2020, the RAC has continued to push for new safety features to be introduced as quickly as possible. Although much of the plan is on track and the installation of crucial stopped vehicle detection technology is now due to be completed ahead of schedule, it seems the only thing that will truly satisfy most drivers is the re-instatement of the hard shoulder.

“The Government is therefore faced with a difficult choice between continuing to roll out unpopular all-lane-running motorways very much against drivers’ wishes or reinstating the hard shoulder, effectively creating three-lane ‘controlled motorways’ which would have the benefit of improved safety features but with less overall capacity.

“The RAC, however, believes there’s a third option worth considering which provides increased capacity without adversely compromising safety. Rather than simply scrapping dynamic hard shoulder schemes, which only open the hard shoulder to traffic at busy times of the day, these schemes could be made the new standard as they still offer somewhere to stop away from live traffic in the event of a breakdown during quieter times, while still accommodating more traffic at busy times. They have also demonstrated very good levels of safety. What’s more, all the technology that’s been installed for all-lane-running would continue to be of valuable use, making dynamic hard shoulder schemes even safer.

“Arguably, all that would be needed is to repaint the sold white hard shoulder line and potentially some additional gantry signs. We would also like to see the ‘red X’ closed-lane symbol illuminated whenever the hard shoulder is not being used as a running lane alongside variable message signs indicating the hard shoulder is for emergency use only so drivers clearly know it’s not in use. That way there is no confusion and anyone who has to stop due to a breakdown or incident is likely to be better protected.” 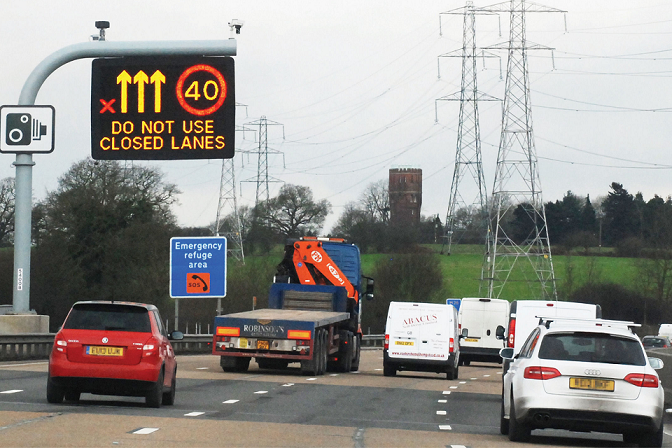